If you were to ask what Lent means to me, like a good recovering Catholic I would tell you that Lent first and foremost is about eating fish on Fridays. As a child, I never looked forward to giving up meat during Lent because I was a picky eater and didn’t care for fish; now that I am older and slightly less picky, when I browse food blogs and see a good recipe for shrimp or tilapia I think, “This would be really good for Lent”.

Aside from the seafood dinners, Lent was my second favorite season of the liturgical year behind Advent. I enjoyed noticing the stark transition from bright and vibrant liturgies to slower, somber observances. I often thought long and hard about what I would give up each year for Lent, usually settling on, like many other Catholics, giving up chocolate or soda. 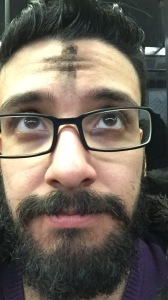 Today is my first time observing Ash Wednesday in quite a few years. Last year, when I started going back to church after a long time away, I did so in the middle of Lent, missing Ash Wednesday by a few weeks. I didn’t take on any specific disciplines for Lent then, still trying to find my way in the church after having been away from it for 11 years. This year, I was really excited for Lent. Like weirdly excited for Lent. I had the initial thought of pulling out all the stops – I told myself, “I’m going to commit to saying all four prayers of the Daily Office every day, I’m going to go to church several times a week, I’m going to take on two new prayer practices, and I’m going to give up alcohol for Lent.”

Now, if you knew me really well, you would know that I have a tendency to do the most – at least when it comes to my prayer life. My housemates affectionately refer to me as “the closet monk”. I admittedly have a strong attraction to more ascetic and regimented expressions of spirituality for whatever reason so in my mind it made sense to take on several practices and devotions for Lent this year – but practically, I also know that one or more of these vows would begin to fall by the wayside by Lent 2. I have to wonder also if my desire to go big or go home for Lent was more about my ego wanting to sound a trumpet or disfigure my face for public praise, as Jesus says, rather than praying to God in secret.

So the other night I had a good, long talk with myself about what it is that I am really wanting to get out of Lent this year. I noticed, for example, that my relationship with prayer has actually been really spotty recently. More often than not when I pray, it’s usually on the T* during the hustle and bustle of my commute to work. It’s not a time that is particularly centering to me. As a result, I’ve felt a little distant from Jesus. I’ve allowed my busy schedule obscure the still small voice speaking to me in my daily life. So for Lent, I am committing to saying Morning Prayer, with intention, every day. Morning Prayer is my favorite office, and I know that doing it makes me feel more connected to God and really sets the entire tone of my day. I decided that if I am going to do it on the T, I’ll carry my prayer book with me rather than using an app on my phone where I’m likely to be distracted by Snapchat or Facebook.

The other thing I wanted to do for Lent this year is to really think about what resistance looks like in my everyday life. Perhaps you’ve also been thinking about this. I read all the articles that get shared on Facebook, I’ve signed up for a slew of daily action lists and groups, I show up to protests and actions and teach ins when I can, and I donate to the causes and people I care about. That should do it, right? Not exactly. The thing I’ve been sitting with is that while I might be resisting on the external side of things, how am I resisting internally? Ultimately I need to consider how my own internalized racism, internalized homophobia, misogyny, classism, and so on show up in my daily life and even in the ways that I resist. If my resistance is going to be successful, I need to commit to uprooting these sins and injustices in myself. I am going to spend time during Lent committing to reading more feminist theologians and theologians of color. I am going to sit with the ways I am not showing up to my relationships with other people  and actively repent. Now that work can’t be completed in the six weeks of Lent- ultimately this is work that will go on for the rest of my life – but this is an ideal time to intentionally do this work. We have to dismantle oppression in ourselves if we’re going to dismantle it in our society and in our relationships with others.

These two intentions that I’ve set for myself this year are deeply intertwined. As people of faith, if we are going to be stand up to injustice, we also have to listen deeply to the voice of God in our own lives and see where the Spirit is leading us to act. Otherwise we will be directionless.  I’m reminded of the words of Archbishop Oscar Romero who was once asked how he sustained his prophetic voice and ministry. He replied, “If it were not for…prayer and reflection with which I try to stay united with God, I would be no more than what St. Paul says: clanging metal.”

So what about you?

The Spirit is leading all of us into the desert for the next 40 days. Where will you find nourishment? Where are you going to pause to reflect? Where do you anticipate that you’ll be tempted and have to struggle with the shadow sides of yourself? And be honest: Are the things you’ve chosen to focus on this year truly about setting aside time to re-calibrate your relationship with God, or are they more about praying on a street corner so that everyone can see and hear you?

Consider the words you’ve just heard in our Gospel reading: Do not store up for yourselves treasures on earth, where moth and rust consume and where thieves break in and steal; but store up for yourselves treasures in heaven, where neither moth nor rust consumes and where thieves do not break in and steal. For where your treasure is, there your heart will be also.”**

Where does your heart lie? Are your treasures hidden deep in the soil of this earth or are they somewhere else? Are your relationships with God and your neighbors where they should be?

Let me leave you with one last question: When you look out into the world, where is your heart breaking? You might have a thousand different answers to this question. But consider one of those places. Notice that pain and sit with it. Let the Spirit lead you through that pain, as She led Christ in His own temptations and suffering. You’re going to wrestle with that discomfort for the next six weeks, because you’ll have to consider the ways you’ve contributed, in your own life, to this heartbreak, because we are all complicit and responsible. It’s not going to be easy. You’re going to want to give up because it hurts, a lot. But remember that after Jesus suffered, died, and was buried, He was raised up on the third day. His suffering was for something so much greater than we could ever possibly imagine. Your suffering too, will lead you to life, for yourself, and for your neighbors.